Share this story
My son was born 2 days before his due date, and I was thrilled that I didn’t have to be induced like I did with my first born. She was induced 2 weeks early and was a bit yellow from jaundice because her liver wasn’t fully developed yet. We had to have her bilirubin levels checked a few days after birth to make sure those levels were going down. The test results were good so we didn’t have to think about it again, and she slowly became pink instead of yellow. I thought I wouldn’t have to worry about jaundice with my son since he wasn’t born early. He came out a nice pink and was just perfect. Our first night in the hospital, however, a doctor came into our room and said they were going to perform a routine test to check his bilirubin levels to make sure he didn’t have jaundice. We were caught quite off-guard when he returned and told us his levels were high. We asked him if his liver was still immature even though he was full-term. The doctor explained that most often, jaundice is caused by an immature liver in babies born a bit early, prior to 38 weeks gestation, and that this was called physiologic jaundice. That’s what our daughter had. It is super common and usually resolves itself without any medical intervention. He went on to explain that our son’s jaundice was caused by a blood disease known as ABO incompatibility. This meant that in the womb, my O+ blood had created antibodies that were attacking his B+ red blood cells and causing them to lyse, or rupture. A byproduct of the rupturing is bilirubin, which is what causes jaundice. You can read more about ABO incompatibility here. Basically, because of our different blood types, they performed the Coombs test to check for ABO incompatibility, and it came back positive. The doctor told us that based on our son’s age in hours and his bilirubin levels, he was in the medium to high risk range and needed phototherapy. We were so sad. The phototherapy consisted of him lying in a hard, plastic container wearing nothing but a diaper and a blindfold, with bright blue lights about 2 inches above his body. I was allowed to take him out to nurse every 3 hours but other than that he needed to stay under the lights. This was hard – I wanted to spend my first night holding and snuggling my newborn. 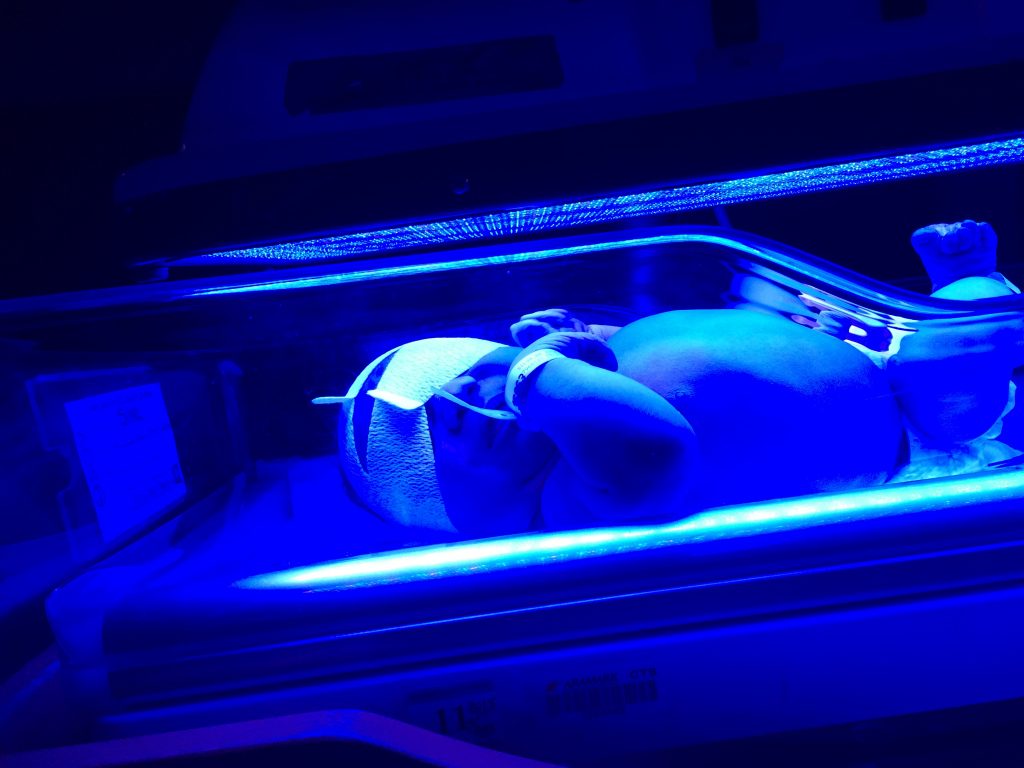 I asked the doctor why that was necessary. It seemed like every other baby I knew of had a case of jaundice, it seemed so common and pretty insignificant. I mean other than being a bit yellow, nothing ever seemed to come from the jaundice. He told us that if there’s too much bilirubin in the blood, it can leave the blood stream and accumulate in brain, causing serious and permanent brain damage. A friend who knew our son was dealing with this mentioned that her friend’s daughter had kernicterus, which is the name of this brain damage resulting from jaundice. She let me know that this is a completely preventable condition and encouraged me to stay on top of my son’s tests and levels. I researched kernicterus myself and realized this was serious. Blindness, deafness, and a form of cerebral palsy are associated with kernicterus, in addition to mental impairment. You can read more about kernicterus here. Doctors are really thorough about testing for jaundice immediately after birth and intervening before bilirubin levels can get to a dangerous level that could cause kernicterus. If phototherapy doesn’t seem to bring the levels down, the next step would be a blood transfusion, and this almost always takes care of the problem. Our newfound knowledge of the seriousness of jaundice, especially our son’s specific cause of jaundice, changed our attitude. We went from being sad that we couldn’t snuggle him to wishing we could’ve had him under those lights hours earlier. So every six hours, our son’s tiny foot was pricked so that his blood could be tested to see if the levels were dropping. They weren’t. We were told that after 2 consistent tests that showed improvement he could be removed from the lights. After about 20 hours of phototherapy his bilirubin levels based on his age in hours was low enough to bump him down to the medium risk range, which meant he could go home! I cried with relief and excitement that I could snuggle him. I didn’t sleep that whole night and just held him against my chest and kissed him and talked to him all night long. My husband wasn’t able to stay with me at night in the hospital because he needed to stay with our daughter at our home, so that night I got our sweet baby all to myself and it was pure bliss. But the worry wasn’t over quite yet. We were instructed to make an appointment with his pediatrician for the very next day to have his bilirubin levels rechecked to make sure they weren’t rebounding. We got in first thing the next morning, they pricked his tiny heel again and sent his blood off to be tested. A few hours later they called back to tell us his levels had, indeed, rebounded. They weren’t high enough to require any intervention, but we would have to return the next day to have it tested again. The next day we went back first thing in the morning, and heard back that afternoon that his bilirubin levels had again gone up. We started to worry, but his levels still weren’t high enough to require intervention. The next day, the test showed that his levels had increased enough to move him back into the “high risk” zone and he would need to start phototherapy again that day. A home-care company brought over a weird lighted paddle that had to be placed on his bare back 24/7. It had a hose that connected to a machine, and so we were confined to about a 3-foot radius of our home while he had this paddle shoved up the inside of his onesie. [caption id="attachment_3120" align="aligncenter" width="541"] 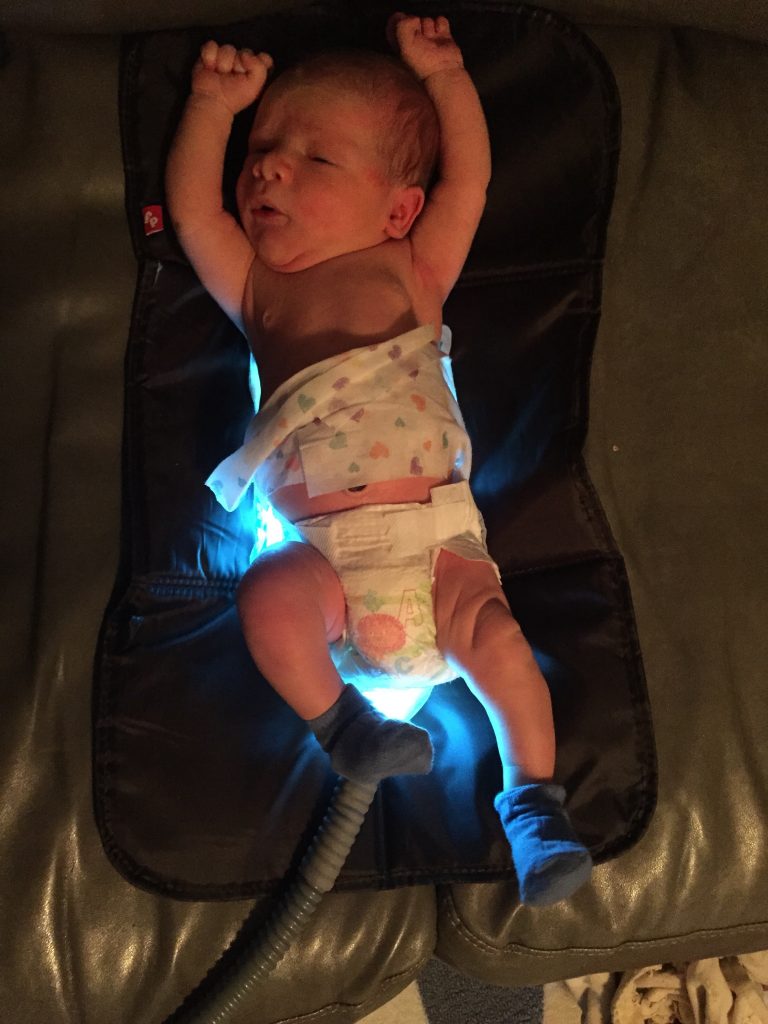 Here's our poor baby hooked up to the phototherapy paddle thing. It strapped to his back with those "wings" that fold around the front of his body. Then we'd put on his onesie with the bottom buttons undone to allow the hose to stay connected.[/caption] The next day we went back for tests, and his levels had gone down! We were relieved that it was working. But although they were lower, they were still high enough to be worrisome, so we had to keep him hooked up to the paddle for the entire weekend. That was brutal. My poor baby had a stiff board attached to his back all the time that made everything so uncomfortable. I only left the spot on the couch where his paddle reached to use the bathroom, and held him there the rest of the time. I slept on the couch at night while he slept in his cradle right next to that machine. Finally Monday came, and we were praying his levels had dropped. We were THRILLED that they had dropped significantly and he was able to be off of the phototherapy! We had a follow-up appointment the next day just to make sure he didn’t rebound once the lights were removed, and once again we were relieved that they hadn’t. We were finally in the clear! We learned a lot from this experience. Being in that limbo stage where his levels weren't dropping but not quite high enough for a blood transfusion was stressful to say the least. We would've never thought jaundice could be serious since 60 percent of babies are born with some degree of jaundice, including our firstborn. We feel extremely lucky to have had such diligent and confident medical providers who took such great care of our son, and kept him from experiencing a serious medical condition. If your child is one of the many who is born with jaundice, don't panic. Do your research and work with medical providers that you trust. Do not hesitate to speak up and express your concerns. Discuss with them all of the possibilities and treatments, if necessary. If you are ever worried about your child's jaundice, call your doctor and have their bilirubin tested - it's a simple and quick test, and could prevent a lot of potential problems. Did your child have jaundice? Did it require any interventions? Share your story below!